Do you know how to paddle through the polynyas?  Ever helped your co-guide spear a polar bear from your kayak?  SKGABC guide and Inuit kayak scholar Noah Nochasak explores the Inuit history of the craft, from traditional origins to the modern Nunatsiavut Kajak revival pilot project today.

Among the numerous kayaking businesses, extensive forms of kayak publications, and marketing lie the kayak’s origins. Where did kayaks come from and what did it mean to the people who invented them? Kayaks hold a rooted history with Inuit in Canada, including present day Labrador, the information source for this article. Kayaks were cardinal to transportation, hunting, and delivering mail or messages. Combined factors of relocation, targeted cultural degradation, and increased technological access after World War II lead to kayak disuse. This pause in Inuit kayak history amounts to approximately 10% of the kayaks lifespan, throughout the north. We will attempt to show a few highlights of this vast history. 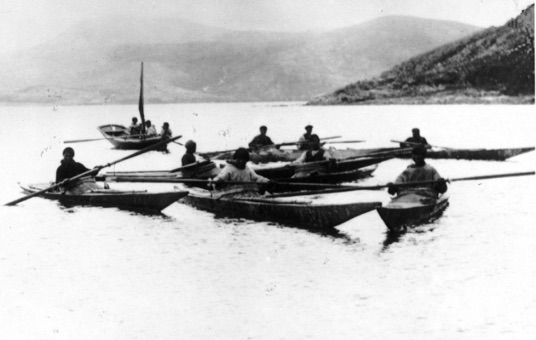 Beginning and focusing on kayaking at a young age allowed many Inuit to progress into expert levels and sometimes consequential terrain. The journey from Nain to Hopedale [100 nautical miles] was described as a "normal two day kayak trip" (H.D. 23.10.86). A story of Sikuliatsiujuittualuk mentions him seal hunting when the sea was rough because he believed the seals less alert. As kayaks were a part of life nearly each Inuit family constructed one.

Nearly all food sources, of all sizes, had solid connections to kayak use. This required a strong background in knowledge of animals and kayak control. A story by William Nochasak recounts “we always used to get white whales, walrus, and seals every year at Ramah. They would spear a walrus and then kill him with a rifle” (Brice-Bennet, P. 121). A story by Solomon Kajautsiak, details occasional polar bear hunting from kayak “My father used to kill polar bears with a spear from a kayak (Brice-Bennett, P. 121). Recordings on smaller food sources such as cod fish note that Inuit often got "several kayaks full" (Taylor, P. 57).

Much of the ocean turns to ice for most of the year in Inuit regions. People made use of kayaks by bringing them to the ice edge to retrieve animals, mainly seals. A recording in Hebron relates “Inuit often placed kayaks on a sledge and drive out a considerable distance until they reach open arm of the sea” (P. 588 Vol. 32 1881). 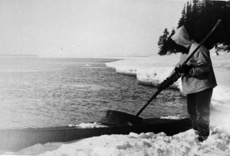 People often had kayaking partners because the dangers of hunting, rough water, and hazards such as shifting ice. These partners could provide aid in emergency. Sungajok, a man from Kivalekh, almost drowned, but was rescued. [O.D. 3.1 2.81]; Kavatsina’s kayak upset, fortunately, someone got to him soon and helped him. [O.D. 5.1 2.81]. However, there are also many accounts of young men dying in late fall too.

Today, the Nunatsiavut Government through the Department of Culture, Recreation, and Tourism has started a Kajak Revival pilot project. In Labrador and other areas of the Canadian north, kayaking is gradually returning through similar projects and interests. Refined skills, such as the rule of thirds, taught by the SKGABC, help kayakers time paddling in polynyas in spring and winter. Hitting slow current holds special importance as the currents can move numerous ice blocks, each weighing hundreds or thousands of pounds.

Inuit in the not-to-distant past were immersed in kayaking. A craft that had thousands of years of history to a culture, has in recent decades become popular worldwide. Many positive things have happened in that time, giant organizations have formed, and much work has been done surrounding kayaks. Yet, the extent of kayak immersion in the north should bear reflection for the kayaker and the kayak professional of today. 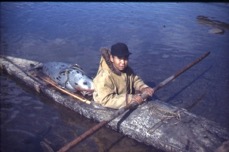